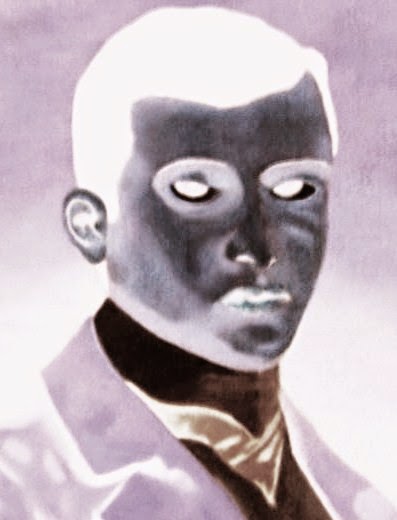 End of the World

From pointed pates blows off the burgher’s hat,
And all the booming air rocks like a scream.
Roof tilers break and tumble from the beam
And on the coasts—we read—the tide is fat.

The storm is here, the savage seas are skipping
Ashore to crush thick dams and break their ridges.
Most people now have noses that are dripping.
The railway trains are falling off the bridges. 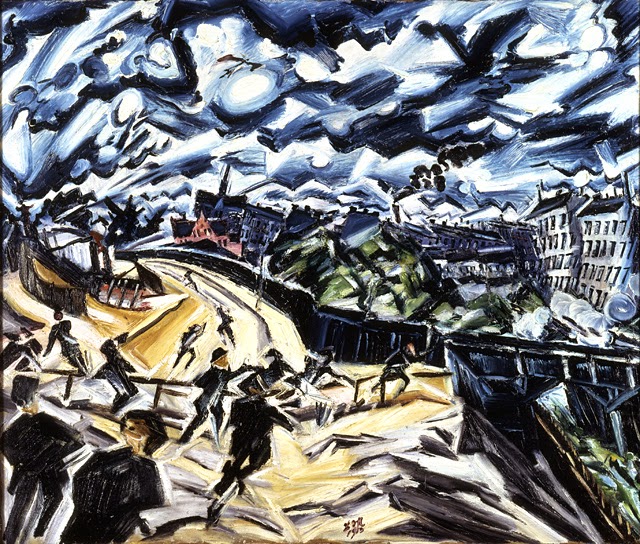 (Meidner was a friend of van Hoddis)

What a grotesque end of the world! Did our poet tinker with journal clippings? And the quality of news, it seems, was not better in 1911 than it is now. Why is it that eight parodistic lines, stringed together, conjure up a "black" utopia of surreal disaster? How could two stanzas be the spark of change? Why are we still fascinated with this little poem more than a hundred years later? (And we forgot "2012", the $200 million disaster film, in 2013.) 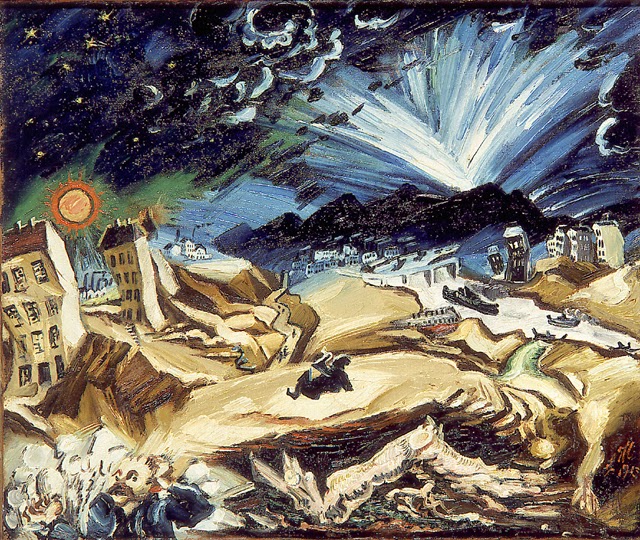 
After more than a hundred years, our end of the world has not ended yet. It presents itself daily as we still sip our coffee with sugar and shocking stories. And right next to it the common news about the cold. Can such a common salad become an "expressionist" vision? Franz Kafka magically turned his boring "reality" of bleak corridors into a "surreal" dream world. And van Hoddis’ mini-collage of trivial clippings inspired generations of painters and poets.


These two stanzas, oh these eight lines appeared to have transformed us into other people, to have lifted us out of the world of blunted middle-class mentality, which we despised but did not know how to escape. These eight lines abducted us. [...] We felt like new men, like men on the first day of creation, a new world should begin with us, and we swore to ourselves to create a restlessness that the bourgeois would be totally stunned and should view it as a grace to be sent to hell. (Johannes R. Becher)

How is such transformation achieved? Visionary collage is an oxymoron. There must be more coherence than meets the sleepy eye. Or ear. An "expressionist" recitation in German does reveal the rhythmic density, especially in the first stanza, of "Weltende". Of course this may just be a conventional ABBA quatrain in iambic pentameter, but the suspense in its "chiastic structure" is expertly built:

From pointed pates blows off the burgher’s hat,

The normal word order is inverted here (normal: the hat blows off the pates), leaving us suspended in "midair". The voice flies up with the hat and this is more evident even in the German:

Only an ignorant recitation would make a full cadence on "Hut". Our upward flight leads us to the rather exalted plateau:

And all the booming air rocks like a scream.

Each stress is a "climactic event" here and we can hear the enthusiastic shouting of the orator celebrating this line:

In the third line the slope is inverted. With the syncopated first syllable "roof" we start the line on a higher pitch and "tumble down" to the low plateau of the droning fourth line:

Roof tilers break and tumble from the beam
And on the coasts—we read—the tide is fat.

Here is a "dumbed down" version of the stanza followed by the original:

The burgher’s hat falls off his tired pate
The air is filled with booming and with screams.
The roofers tumble down from broken beams.
The coast is wet and tidal waves are great.

From pointed pates blows off the burgher’s hat,
And all the booming air rocks like a scream.
Roof tilers break and tumble from the beam
And on the coasts—we read—the tide is fat.

To appreciate the difference in effect, please recite these two versions several times and with loud gestures (make sure you are alone)! I imagine the original stanza in the "Sprechgesang" of Arnold Schoenberg’s Pierrot Lunaire (1912). The stretched out syllables and the gestures of the voice resemble the exaggerated gestures in silent movies (Nosferatu, for ex.).

Its prosody of expression is impressive but this alone cannot explain the visionary impact of the stanza. Ironically the compact prosodic shape appears to have been grafted onto four unrelated images served with grotesquely tossed metaphors. Do burgher’s have pointed pates? Should not a square man have a square head? Van Hoddis must have mapped the "Spieß" (spear) from "Spießbürger" onto the head ("Spießerkopf") and then turned it into "spitzer Kopf". Flying hats shall not make the air of this planet reverberate with screams. It is callous to describe the death of roofers with "break" ("entzwei gehen" is actually "go kaput"). Is this a toy world? And after a promising vision of the screaming air it is rather disappointing to read that the tide is rising on the coasts. How unserious! Compare van Hoddis’ lines to the heavy opening of Else Lasker-Schüler’s "Weltende" (1905):

End of the World

There is a weeping in the world
As though the dearest God Himself were dead,
And the plummeting shadow, it burdens down
like a grave of lead.

In comparison, are van Hoddis’ images not the wandering daydreams inspired by our morning journal? With coffee?

But dreams—as the intelligent psychologist surmises—may be held together by underlying vision. A vision powered by a mythos. The fragments seem to be strung together in a haphazard manner. But are they unrelated? Hats fly up into the air. The air, up there, is booming. Roofers fall from up there. And down here the water is rising. We may, for fun, replace these images with more serious ones: the burgher hats fly upwards = shuddering people stare upwards towards heaven; screams in the air = there is howling in heaven. Not the roof tilers fall from heaven but Lucifer and his apostate angels. And they fall down into the pit and into the rising tides of their evil emotion. Or, better even, replace the water with fire. 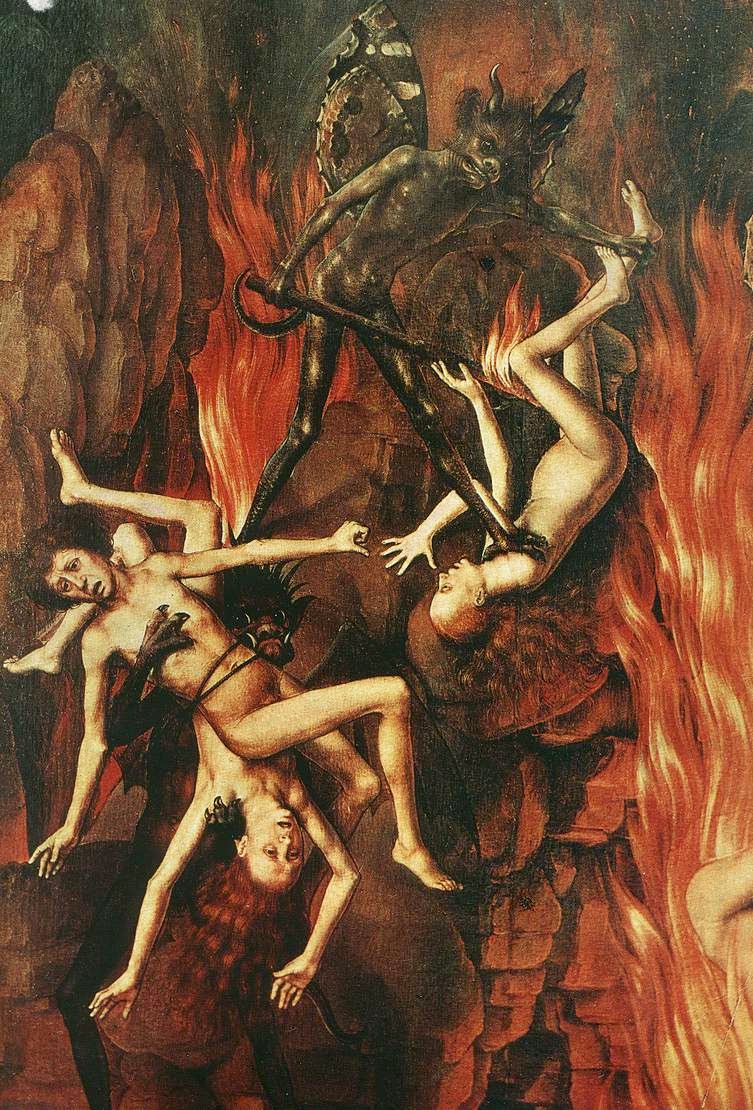 Are not the loose images of the first stanza grafted onto the revealed "Höllensturz" ("War in Heaven")? The mythical vision comes in the dress of a clown here but it certainly has not lost the magic of its visionary power. On the contrary! Those—like me, for ex.—who find pompous revelatory language indigestible, shall now remove the hat from their pointed pates and bow deeply. 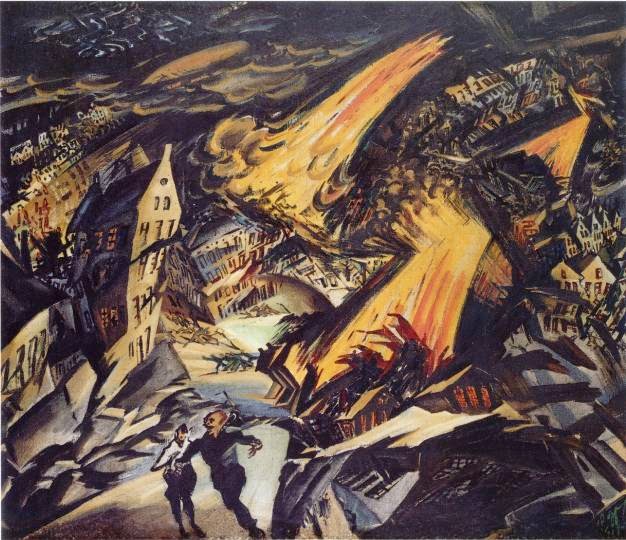 
The storm is here, the savage seas are skipping
Ashore to crush thick dams and break their ridges.
Most people now have noses that are dripping.
The railway trains are falling off the bridges.

The second stanza, ABAB, fragments with its last two lines. At first the drama seems to intensify, "the storm is here" sounds powerfully laconic and we wish the ocean good luck in its crushing of bulky dikes. Skipping seas that crush dams remind us of a naughty child again ("hupfende Meere" die "dicke Dämme zerdrücken" sounds cuter even). In the third line though the irony is exaggerated and the vision breaks. The boring rhythm of "Die meisten Menschen haben einen Schnupfen" is almost more crushing than the skipping seas. The fourth line is a rhythmic parody of the third. Compared to the common cold, falling trains are serious indeed, but we cannot take this news serious anymore. Our vision has fragmented. We became callous. Maybe that is the end of the world. 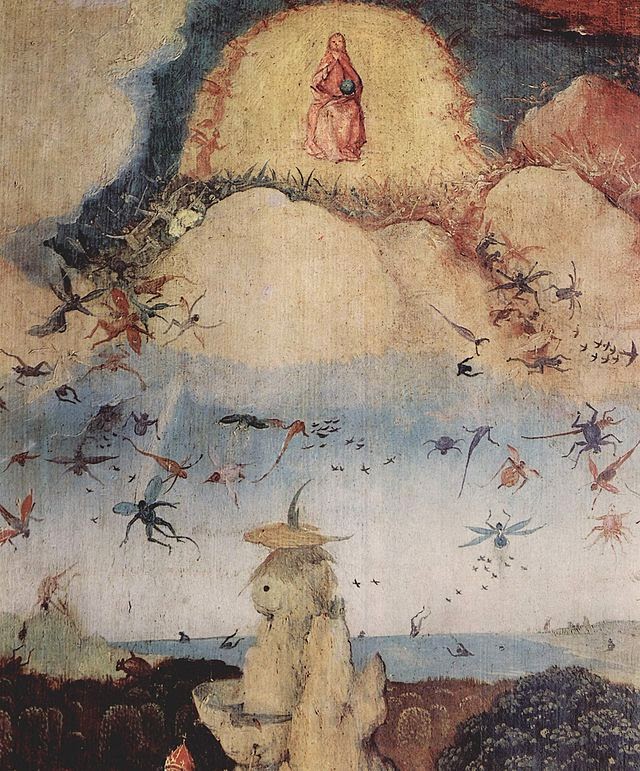 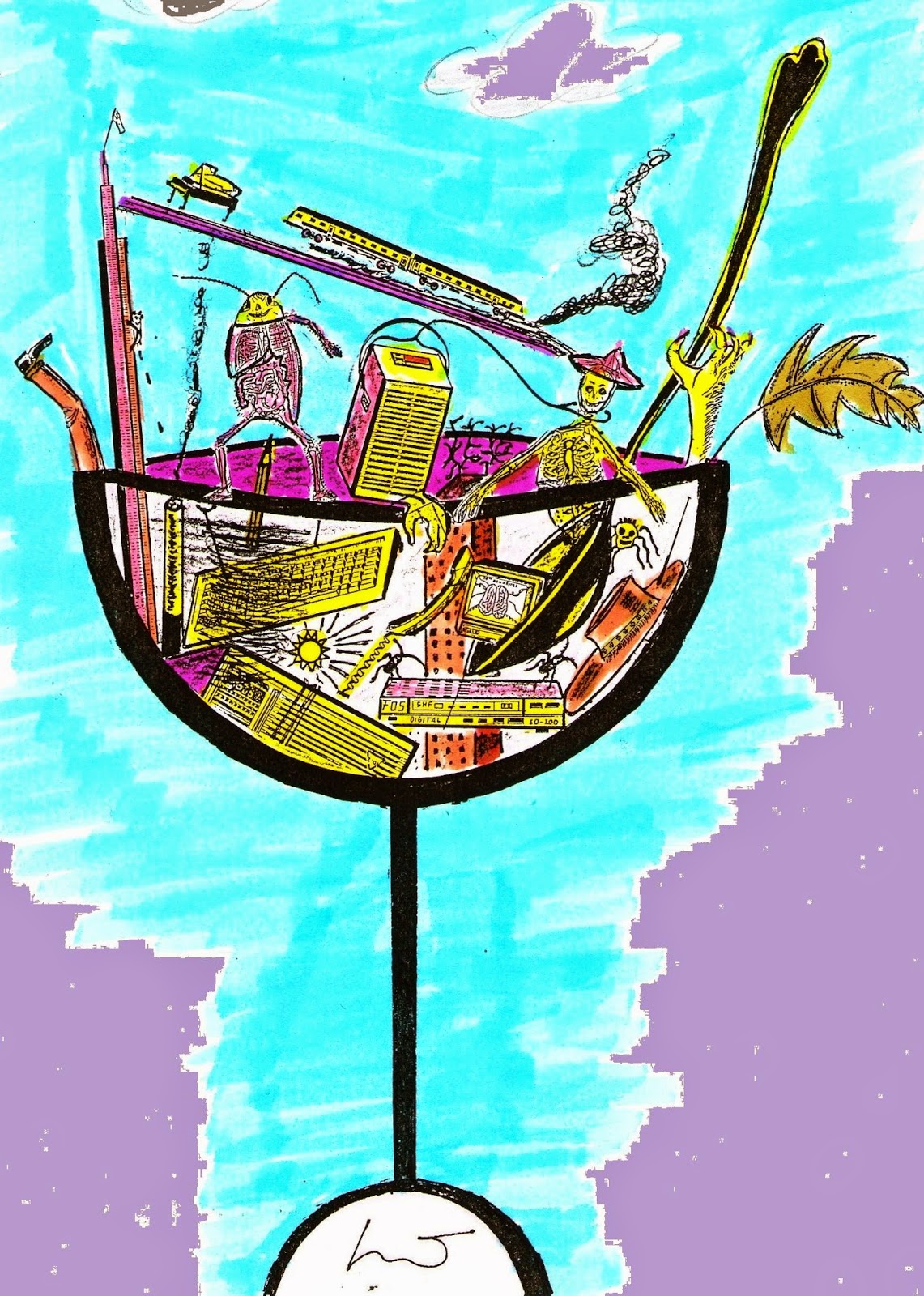 Posted by Rolf-Peter at 2:42 AM No comments:

other translations by Rolf-Peter Wille